Opt in to Web Notifications for delicious food, stories, guides and conversations. Every Week. Get inspired. Opt in  Not now
Privacy Policy © 2021 All rights reserved

In a large pot, melt the coconut oil over medium heat. Add the onion and garlic and let cook about two minutes, careful not to brown.

Add the pumpkin, ginger, turmeric powder, filtered water and vegetable stock. Bring to a gentle boil and cook for 20-25 minutes until the pumpkin is tender. Cool to room temperature before transferring to your blender.

In 2-3 batches blend the soup in equal parts with coconut milk. Adjust seasoning to taste at this point.

To achieve a thinner consistency, use additional coconut milk or vegetable stock. Transfer soup to bowls and serve immediately.

Leftovers will keep for up to 3 days in the fridge, for those nights you do not feel like cooking. Herein lies the solution, reheat on the stove top for 10 to 15 minutes. 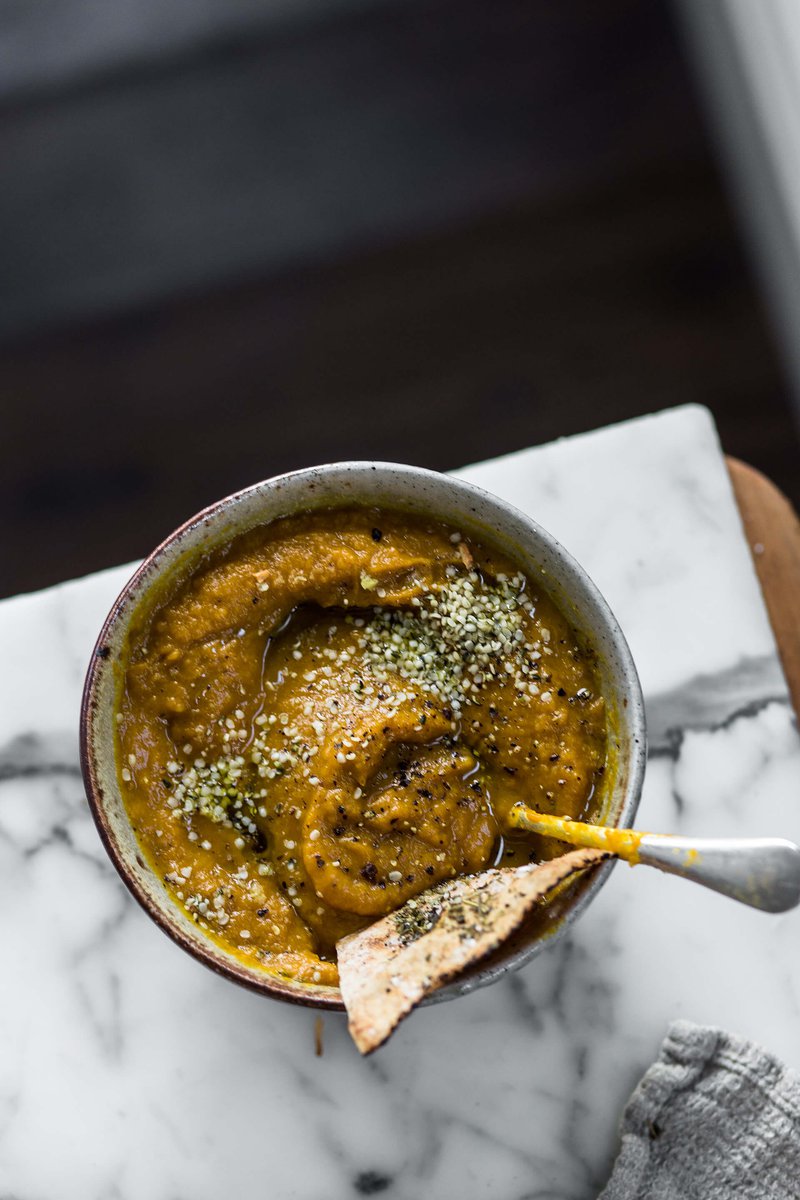 This is an ultra creamy pumpkin soup that contains within it all the life-giving magic of plants. Full disclosure, it is a variation on our kumara pumpkin millet soup, though requires slightly less of you, fewer ingredients and I think less time. Charli, who had for a time dwelled with us had wanted to prepare soup for one of our Tuesday night dinners. And soup doesn’t ask much. She came after work, dropped a bag on the counter and started pulling ingredients out, and it was as if she had never left. A half pumpkin, coconut milk, garlic, ginger, there was a partial pumpkin in the fridge I was yet to use so that would go in there too. That and sourdough, we would have enough to feed six. I highly recommend this soup frequently during the winter. It keeps wonderfully for up to four days and can be frozen. And if time allowed, you could roast the pumpkin. I do on cold nights when I’m craving warmth and want to nourish my body with wintery food.

Turmeric adds life-giving magic to this pumpkin soup; here we used the Latte Blend from Amazonia, which delivers a healthy dose of organic turmeric and Ayurvedic spices. And to activate its health-giving properties, Amazonia has paired it with black pepper and cinnamon which works with the coconut milk and oil here, providing us with the opportunity to enjoy the benefit of all of those disease preventing qualities that are so powerful in turmeric.

Coconut milk makes this soup super creamy, though if you did not have coconut milk or were wanting to avoid the calories, you could opt to use additional vegetable stock. The soup will still be good, just different, lighter. Currently, I am using San Elk Artisan Vegetable Stock, Natural Things had kindly sent me some to try, and it is beautiful. San Elk was born from the desire to create an all natural stock made with fresh, certified organic ingredients. Supporting local farmers and producers, San Elk produces their stocks in small batches in West Footscray, Melbourne. Made from certified organic vegetables, herbs and spices, this artisan vegetable stock delivers an intensely herbaceous flavour as delicious as it is authentic. And I think attitudes are changing in that regard; more people are reverting to traditional to sourcing local and seasonal food.

It is hard to understand how the majority are so completely disconnected from what they put in their body. I blame television dinners, advertising and microwaves. I am an 80’s child, the health narrative was focused on diets, and I guess still is but it would seem there is more of a focus on celebrating food now. There is a movement of consideration. For the most part, it seems to operate in niches and circles, but if you were inclined, it is an underground explosion. That is how it feels to me.

I initially committed to a vegan diet at the age of sixteen, having already been locate-vegetarian for two years prior. And at first, I was eating a lot of apples and a canned bean mix with microwaved peas. It was all very underwhelming. It was not until my early twenties that I really started reading, absorbing everything I could about nutrition, I still find it super interesting, it is why plant-based diets work. I read Doll and Peto’s Quantitative Estimates of Cancer Risks and that changed everything for me. Around this time, my mother was diagnosed with breast cancer, and in a way, the timing was perfect. It helped my understanding immensely. For me, there is also perspective here, and there can be a lot of power in that but then as you go deeper, learning and understanding more, reclaiming your vitality. I live with my closest friends who are more likely to be at home cooking rather than out drinking — and they are pretty aware of what they are eating, the house eats mostly plant-based. Plant-based is, therefore, perhaps more about what we are consistently leaving out of our diets. That is how I talk about plant-based; I always figured that approach would resonate more with people.

There is a certain degree of isolation in eating plant-based, less today than say ten or even five years ago, but it would be dishonest to state otherwise. Vegan products, vegan cuisine was extremely limited at that time. No one was making vegan mayo; you definitely could not expect to find vegan cheese — anywhere. Almond milk was purchased from a health food store, imported from the United States; no one was producing those things then. Eating out was extremely difficult. You took food to people’s places, which to some, I suppose, would seem quite disrespectful. That was the only way you could share a meal, to share that experience of connecting over a universal commonality — food.

I think there is a lot of focus given to macronutrients and micronutrients. I prefer to focus on the foods required and less on these specific ratios, that will look different for everyone. That and I am not interested in talking about carcinogens in meat. I’m more interested in talking about the potent anti-inflammatories and antioxidants in oats that work synergistically to fortify, protect and nourish your body — and how essential oat beta-glucans are and their impacts cholesterol levels and gut health. Oats are amazing. I think that can be a powerful tool, just having those conversations, that we all have this innate healing capacity within us. And then you see how things shift, and change — our ceremonial Tuesday dinner gatherings have been plant-based for the past two years, and animal proteins are rarely consumed in our house.

At the time I am writing this Charli has moved back in temporarily after leaving a toxic tenancy agreement. As is life. We have made more soup together since. And croutons which are simply sourdough torn into pieces, baked with olive oil, garlic and sea salt for 15 or so minutes. They are wonderful. This pairing is very much on high rotation in our house. And so whether you share it with the people you care about around the table or with Netflix — make this soup.

Everything we create is an effort to participate in a culture shift. All products featured are independently selected and curated by the authors, and we only feature items we use or would use ourselves that align with our values. As part of our business model, we do work with affiliates such as Amazon. As an Amazon Associate, we earn from qualifying purchases if you decide to purchase through our links. The price would be the same to you either way, but if you find value in our work, then these affiliate links are a way to support it. We only recommend brands, makers and products we use - that we support. Transparency is important to us, so if you have any questions, please reach out to us.

Subscribe to receive your free ebook featuring 11 plant based recipes, meal plan and tips for reducing waste and saving money.

Thank you for subscribing!

Check your inbox to confirm your subscription.
© LAGOM 2021, All rights reserved

Subscribe to receive your free ebook featuring 11 plant based recipes, meal plan and tips for reducing waste and saving money.

Thank you for subscribing!
Check your inbox to confirm your subscription.